What makes before and after photos bogus?! 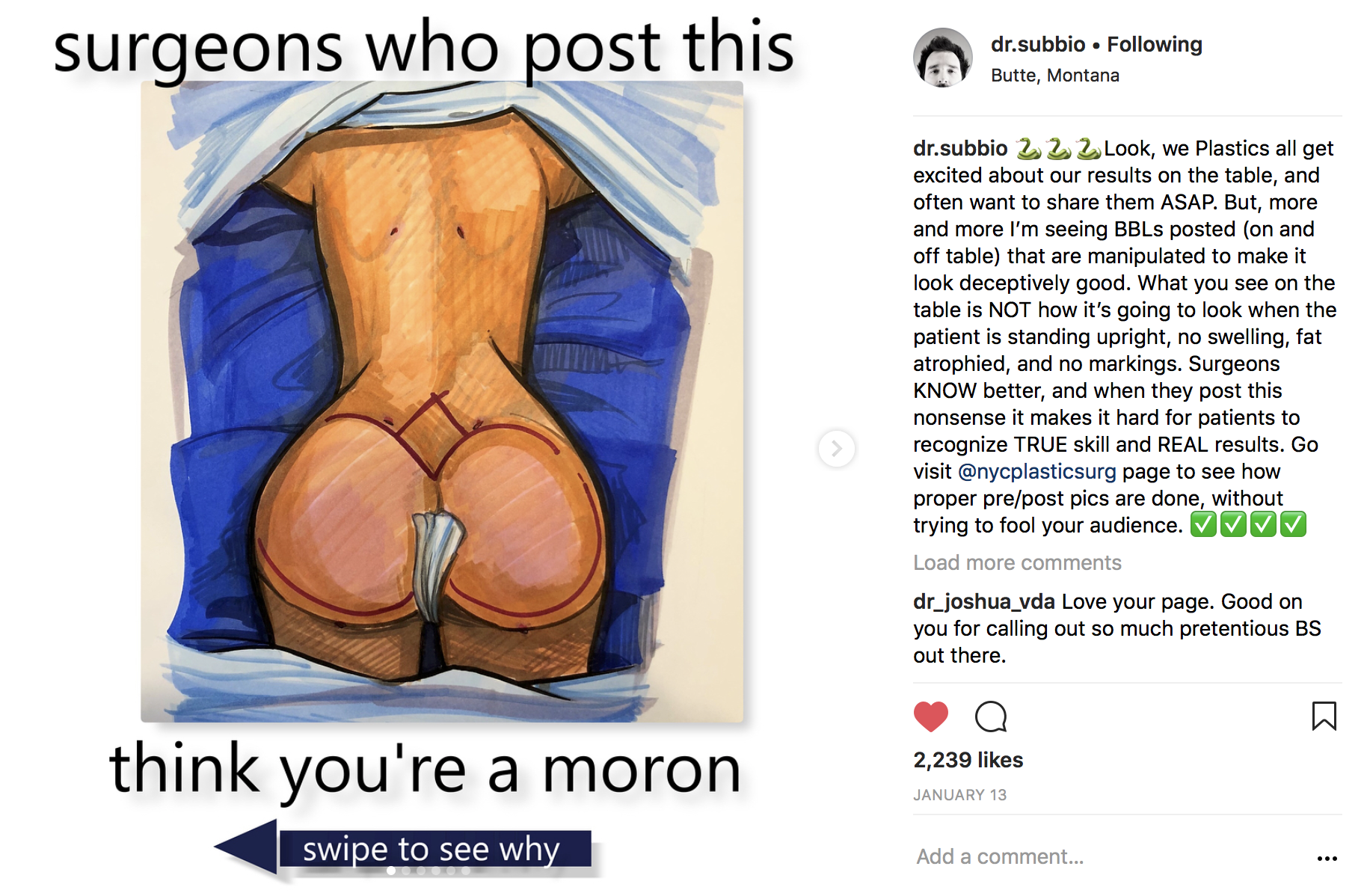 Amazing artwork courtesy of Christian Subbio, used with his permission. Follow him @dr.subbio on Snap & IG.

With the advent of Instagram and the widespread sharing of before and after photos by doctors to an ever-increasing audience, the consumer needs to be wary. All is not what it seems. Sharing before and after photos isn’t new. For years doctors have shared their photo gallery on their own website. But that’s not the same as sharing photos on social media.

For one, there wasn’t a “crowdsourcing” of consumer “photo” knowledge prior to social media. What I mean is that consumers couldn’t leave comments under the photos on a doctor’s website. On Instagram, once consumers view an exhaustive number of before and after photos and educate themselves, they know a bogus photo when they see it. And they’re happy to share their knowledge in the comments on social media.

With this new-found knowledge, consumers, and even doctors themselves, are calling doctors out for disingenuous photos. The following will serve as a tutorial for the doctor on what not to do…and for the consumer – when you see something, say something!

How to spot bogus before and after photos: Lighting

A perfect example is demonstrated below by Dr. Christian Subbio of Newtown Square, Pennsylvania. In the rotating images below, he reveals the secret to his non-invasive makeover. Light! Even as a seasoned plastic surgeon taking before and after photos for years, I’m still amazed how much the lighting and position of the head can affect perceived results.

Used with permission. Dr. Christian Subbio. Follow him @dr.subbio on Snap and IG.

How to spot bogus before and after photos: the Angle

I’ll admit I’m guilty of posting an immediate ‘after’ photo of a patient on the operating room table on Snapchat or Instagram Stories. My rationale is that while broadcasting the procedure in a quasi-live manner on social media, it would leave the consumer wanting if we didn’t show the patient immediately after surgery.

Of course it would be more accurate to show the patient in the same position as the preop photo. But all preop photos show the patient in a standing position, regardless of whether we’re talking about a facelift, breast aug or tummy tuck. At the end of the operation, with an anesthetized patient, we can’t very well stand the patient up. Remember Weekend at Bernie’s?!

So while I recognize this is comparing apples to oranges (standing before and laying down after vs standing before and standing after), the audience watching the procedure would be aggravated if we showed nothing. So we leave it to the viewer to judge for themselves, knowing full well that the preop is standing and the immediate postop is laying down. You can hear my opinion further articulated in the video below.

That said, this is different than an intentional trick used by some doctors. As illustrated below by our friend Dr. Subbio, the patient’s position on the bed is manipulated further than just comparing standing “befores” and laying “afters.”

Used with permission. Dr. Christian Subbio. Follow him @dr.subbio on Snap and IG.

What about tummy tuck scars?

Before plastic surgeons get too self-righteous about what is and is not appropriate, they should consider one technique we’re all guilty of. Ever notice how most before and after tummy tuck photos have the underwear covering the patient’s incision? Sure it would be more honest to show the patient’s incision, as I’ve done before. But after the thousandth viewer asks why the patient has a scar, it’s easier to get on the same playing field as other surgeons and just cover the incision. It’s disingenuous in my opinion to act as though the patient doesn’t have a scar after a tummy tuck. But it’s better than taking the high road, showing the scar, and never doing another tummy tuck because patients think you’re a hack!

What other examples of bogus before and after photos have you seen? What’s your opinion on this subject?