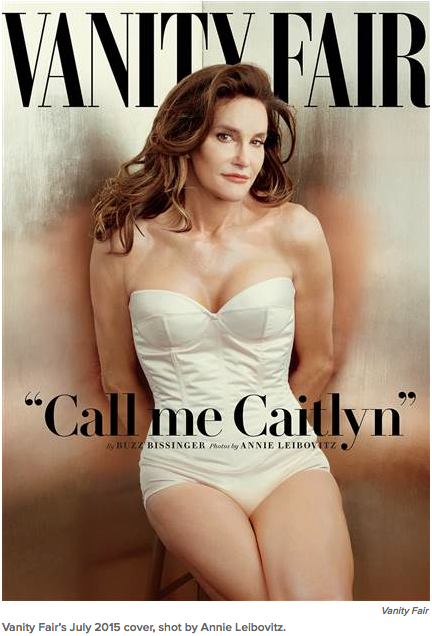 I can’t think of a bigger pop cultural earthquake than this whole Bruce Jenner thing. I think my apoplexy is clear just from the title of this post – doesn’t that statement sum it up for most of us?! Regardless of what side you come down on this subject, the initial reports that the 1976 World’s Greatest Athlete was transitioning to a woman and then the appearance of Caitlyn on the cover story in the upcoming Vanity Fair is shocking. I will now proceed to start each subsequent paragraph with “I can’t believe.”

Mostly I can’t believe how ironic this story is. Such a manly man becoming such a girly girl. Maybe Arnold Schwarzenegger would have been more perfect?!

I can’t believe how much she looks like a woman. I heard that when she used to go out of town for a convention or meeting, she would dress up and hang out in the lobby and no one would recognize her. I found it hard to believe that Bruce Jenner in a dress wasn’t easily recognizable but now that I see this Vanity Fair cover photo, I would not have recognized her. Honestly, she looks like the quintessential cougar, and I don’t mean that in a derogatory way.

I can’t believe she was so clearly a woman in her mind for all of these years and that she is so unequivocally and unrepentantly making such a change in her life at the age of 65.

I can’t believe that’s her on the cover of Vanity Fair.

I can’t believe her plastic surgeon did such a conservative, not over-the-top, job on her face and breasts. Very understated considering the potential for excess in Southern California!

I can’t believe what a goldmine the reality show, “Keeping up with the Kardashians” has become for producer Ryan Seacrest. I’m not suggesting in the slightest that this is a publicity stunt. As Bruce Jenner has clearly stated, “You don’t go out and change your gender for a television show. O.K. it ain’t happening. I don’t care who you are.”

I can’t believe how the world will remain riveted by this story for the foreseeable future.