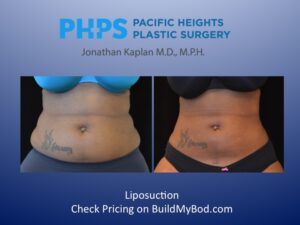 Lipo 360, also referred to as 360 degree liposuction can mean slightly different things to different people. In general, this is simply a clever name for liposuction to the front and back of the torso.

What does lipo 360 include?

If you review other articles on the internet, lipo 360 differs only in what parts of the body are treated. First, let’s start with what lipo 360 does include. This procedure includes liposuction to the abdomen, flanks, lower and upper back. Pretty much the entire core.

However, some doctors will also include liposuction to the arms and thighs. That varies from doctor to doctor so it’s important to ask during your consultation. Even if your lipo 360 doesn’t include the arms or thighs, your doctor may add it at a discount.

The other variation in lipo 360 is if it includes traditional anesthesia. Doctors that use laser lipo for their liposuction may not be board certified plastic surgeons. And therefore, they must do these procedures in their office under local anesthesia only. This can be very painful for front and back liposuction. For that reason, find a real cosmetic plastic surgeon that has the facilities to provide either deep IV sedation or general anesthesia. This will be a safer route for you and allow for a more aggressive result.

To check pricing on lipo 360 or liposuction to the abdomen and flanks from Dr. Kaplan, click here.