So we’re to believe some mass gatherings are ok during a pandemic? 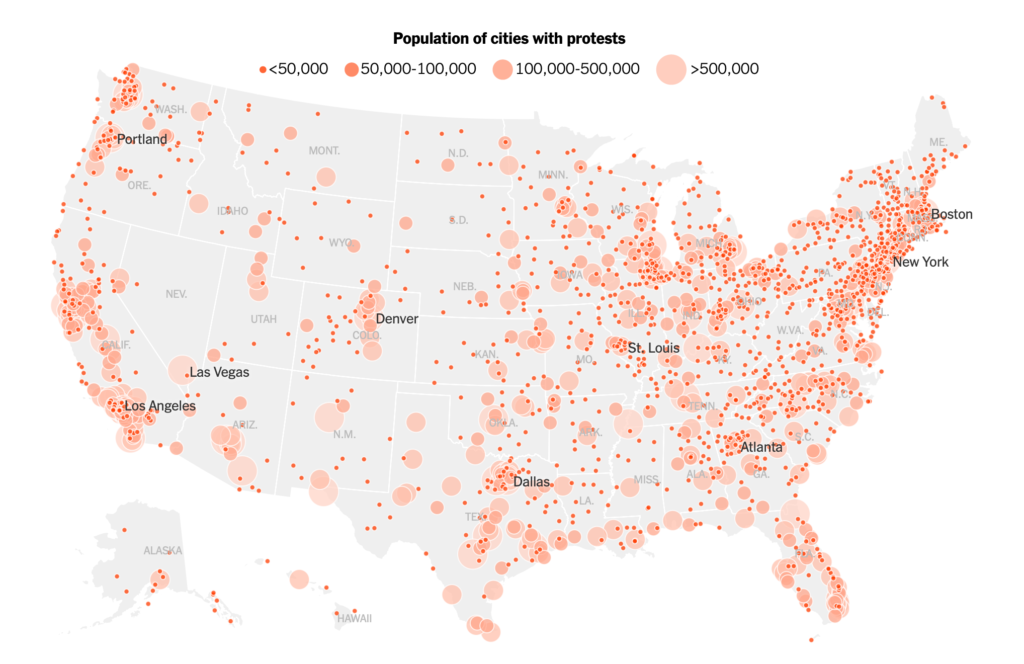 Locations of protests during the month of June. Courtesy NY Times.

Early on in this pandemic, the recommendations from the CDC and state authorities were pretty clear when it came to mass gatherings: don’t have them. In fact, the CDC reiterates this guidance in an update from July 7th, 2020. The highest risk of spread of the coronavirus comes from “large in-person gatherings where it is difficult for individuals to remain spaced at least 6 feet apart and attendees travel from outside the local area.”

What constitutes a mass gathering?

In other words, congregating in large groups can lead to a surge in infection, like the surge we currently find ourselves in. So what qualifies as a mass gathering? If you sample articles like here, here and here, you would think mass gatherings only apply to debaucherous events such as partying during Memorial Day or July 4th weekends. In the articles above, the banner image is often that of folks partying on inner tubes, bars or beaches.

Noticeably absent in the national conversation about this surge are the largest mass gatherings over the last 6 weeks: protests. If your only source of the world around you was traditional media, you would think protests are exempt from the definition of mass gatherings.

Why is that? Why do political protests against police brutality (an obviously worthy cause), get a “pass” when it comes to assigning responsibility for a surge? It’s as if we’re afraid to recognize the role of the recent protests in the current surge. Are linking protesting and surges somehow politically incorrect? Is there really no scientific basis to state this simple fact: mass gatherings of any kind, including protests and parades (as in the case of a war bonds parade in Philadelphia during the 1918 influenza pandemic), increase the spread of the disease.

Here’s a quote from an article about Pittsburgh, Pennsylvania’s recent surge that epitomizes this ongoing journalistic dishonesty and total lack of recognition about the role protests play in spreading the coronavirus:

“The main source of the current outbreak is largely undisputed. People who had been cooped up for months flocked to the city’s bars and clubs, crowding shoulder-to-shoulder like old times on East Carson Street.”

No mention of the protests occurring in Pittsburg throughout the month of June. No mention of thousands of protesters with and without masks, yelling, chanting and spreading droplets of virus amongst other protesters. 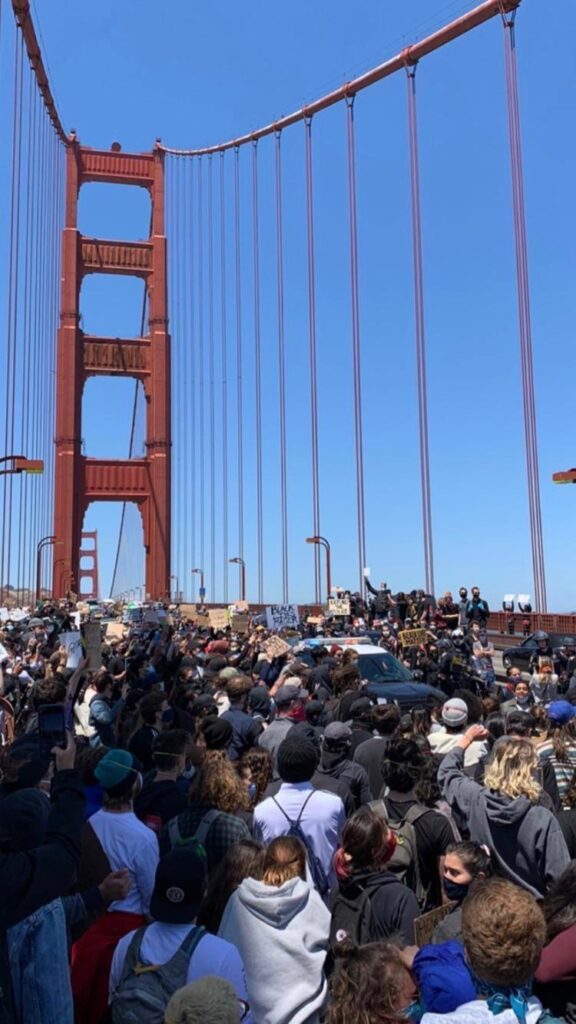 Social distancing during a protest across the Golden Gate Bridge in San Francisco.

If you question the validity that protests are potential super spreader events, this map of the more than 2000 protests that took place across the US should make you reconsider.

Based on research from the Pew Research Center, the majority of protesters were ages 18-49. This corresponds with the same age group that is contracting the virus during this surge.

While the media is hesitant to blame the thousands of protests that took place across the country in June, they’re quick to blame a single pro-Trump rally for a recent surge in Tulsa, Oklahoma. Keep in mind that the media initially reported a “disappointing” low turnout for the Trump rally but then weeks later determined there indeed were enough people attending the rally that it was responsible for the subsequent surge in Tulsa.

All of this is to point out two realities: 1) surges are not political phenomena and 2) not recognizing the role of protests in the current surge diminishes the credibility of our news media and public health officials.

Surges are epidemiological realities of mass gatherings. It’s immaterial as to whether you’re a Democrat or Republican, or whether you agree with the social justice issue at hand. Protesters need to recognize that while they are fighting for a worthy cause, they’re endangering the same minority communities they’re trying to help. And how worthy a cause may be, is irrelevant to the transmission of viral genetic material.

Understandably, stopping a protest because of concerns about the spread of the coronavirus is impractical. Nothing is stopping the rage and anger leading to these protests. But when there is a surge, the media should recognize it for the epidemiological inevitability that it is, rather than avoiding the reality because it may be politically incorrect. Admitting to and recognizing problems and how best to deal with them doesn’t just apply to social justice. It also applies to pandemics.

Protesters need to recognize that while they are fighting for a worthy cause, they’re endangering the same minority communities they’re trying to help.

Despite the overwhelmingly skewed coverage of the surge, this article attempts an honest look at protests as an example of mass gatherings that are leading to the surge across America. The article interviews and highlights the hypocrisy of public health officials that essentially say mass gatherings in a pandemic are ok if you agree with the context of the protest. And these opinions are being promoted by people supposedly motivated by science and not politics.

The ignorance of these public health officials further reaffirms the erroneous belief held by members of society that this “pandemic” is a hoax. That segment of society is hearing that it’s not ok to socially distance in a church, but it is ok to be in a protest where protesters are shoulder to shoulder, potentially coughing and wheezing from tear gas. Is it any wonder that Americans are disillusioned with our elected and appointed leaders who issue directives and edicts about social distancing?

Bottom line: if you must protest, first, recognize that you are contributing to the spread of a virus that is not a hoax, and affects the young and the old alike. Second, consider the safest form of protesting: a caravan protest.

Dr. Jonathan Kaplan is a board-certified plastic surgeon based in San Francisco, CA and founder/CEO of BuildMyBod Health, a price transparency-lead generation platform.